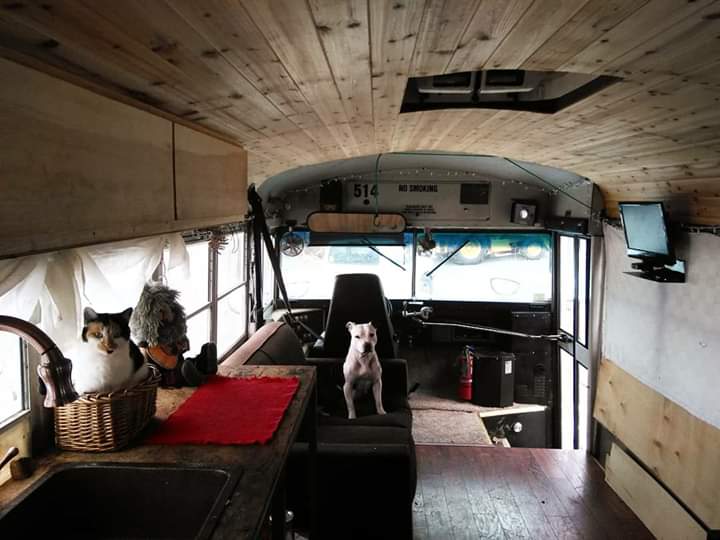 The school bus conversion corner has been increasing over the past decade. Hundreds of people are giving up their 9-5 day jobs to experience life on the road.

A Lot Of People Have Money: I Didn’t

Back home in New Hampshire, the winter dominates approximately 6-months out of the year. The rest of the time, it’s either fall (which is cold) or Spring(which is cold and rainy), there wasn’t much to do between those times other than work, so I did. I had one stable full-time job, and I filled the rest of my time with part-time work here and there. By the end of everything, I had saved up enough to purchase a bus flat-out. For about 5 Grand, I was able to purchase a 2005 GMC bus with 75k in miles. I got away with a steal, but for others, they might not be as lucky. From there, it was another 6-months of straight working to save up the necessities to complete the process. In total, I spent about $7,500 to make my bus “livable”

You see people online who have done similar conversions, they had full-time higher-paying jobs than what I had, so they make the whole process seem easy. In truth, it’s not. There is a lot of time working between three jobs in order to get your bus moving. These people saved up cause they could, where I didn’t have much. I just had what I had, my hard work and my determination.

In my home, I had a space for my bed (full-sized), a sink, a couch, and a mini-fridge. That was it and that’s all I needed. The rest of the bus was accommodated for storage space. Everything electronic was powered by the solar panels that I had installed (once I had the money). Being able to predominantly survive on your own without the accommodations of electricity all the time got tiresome. Sometimes you need to charge your phone, laptop, or anything else that connects you to possible work while on the road, in which case having a consistent power supply (other than the battery) comes in extremely handy. Other than that, it was the bare necessities.

When I sat down and said “my bus is ready to live in”, I had a resheathed floor, my bed was on wood posts that my neighbor had laying around and enough to live off of. It wasn’t the prettiest, but it was accommodating and comfortable. That was all I needed.

The Gas is a Stab

Oh boy, your home is now home (to some extent) and you’re ready to drive around. My first couple of quests outside of my driveway were to music festivals in the local area. I hadn’t driven my bus for more than an hour before the reality of how expensive gas consumption was going to be for my new mobile home. I made it a point to use my bus as a go-to festival camping mecca. Only using it to go between the local music festivals, it became a staple for all my friends. They could easily tell where they were in adjacency to my bus, but man, that gas price was rough.

They Provide Awesome Sanctuary for Friends

I would have friends whose tents got stolen, it rained, or anything else that would prevent them from sleeping come to my bus for a brief sanctuary. It felt great to be able to provide a living space for so many wanderers. If you were part of the group, you had to make a pilgrimage to my bus. Many would swing through hang out for a minute to get out of the sun (or rain) and come chill, get comfortable, take a nap, or anything else.

When the time felt right and my bus was in a little better shape than just the basic necessities, I decided to make a trip out to a festival in New York. The trip was 6-hours and on the way there, no problems. On the way back, however, I had a small mishap. My alternator died. I was able to get my bus off the highway and pull it over onto a side road. From there I Uber my way to the local auto parts store and found a new alternator for the bus. I then took an uber back to my bus and swapped it out.

The process took a significant amount of time, and being on the side of the road doesn’t necessarily help, but after, my bus was back up to shape. School bus homes can be like that sometimes. Which is why it’s a good idea to have a lifetime warranty on whatever parts you buy.

It Doesn’t Need to Be One Big Purchase

If you look up tutorials on Youtube, you’ll find that most people had the income to do this right off the bat. The reality is nobody has the capital to just up and do something like that. it takes time. School bus homes aren’t built by the wealthy, if you were wealthy, you’d have a camper, or an RV, but not a school bus. The fun comes from building your own home the way that you would want it. It will always be a “work in progress” and you should feel accomplished after completing every task. Every addition acts to build the foundation of your home.

Mitsubishi Ralliart Revival Teased With An Update On The Outlander SUV