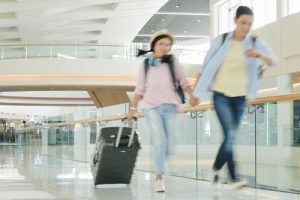 Mineta San Jose International Airport is one of the unique ones that is chosen by the United States Customs and Border Protection agency to use facial recognition service to scan all arriving and departing international travelers.

You’ve probably endured long lines upon landing to clear U.S. Customs & Border Protection (CPB). The process will go faster now because Mineta San Jose International is upon using the system to speed up line time at the airport.

“Wait time prior to facial recognition is around 29 minutes per passenger,” said Brian Humphrey, regional director of CPB for San Francisco and Portland. “Now we’re below 22 minutes.” On Friday, it was down to 20 minutes.

Arriving passengers have their photo taken, and it’s matched to the photo already on file from a previous visit, from a visa application or from a passport.

“We’re using a computer algorithm to make sure the person standing in front of us is the same person that that passport was issued to, rather than a human being just looking at the two and comparing it visually,” said John Wagner, CPB’s deputy executive assistant commissioner for field operations.

The success rate at Mineta San Jose has been around 99% as the system started operating in late June. Part of that high figure is tied to the limited database it’s searching. The algorithm only has to check against the list of people on board a particular flight. If that fails, then the backup plan requires a passport or other paper authentication.

Here’s one of the biggest changes travelers can expect: all departing international passengers will be photographed at the gate before they board their flight. The images give the government verifiable biometric proof that a U.S. visitor has left the country, and presumably, will also be used to match citizens when they re-enter the country.

When entering the United States off a flight, passengers are photographed at passport control. Facial recognition software compares the image against passport or visa photos the federal government already has on file. The process takes less than a second. It eliminates the need for agents to scan passports manually and visually compare travelers to their passport photos — both are time-consuming tasks that slow down immigration lines.