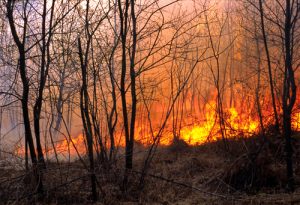 The Southern California blazes spreading through Ventura and Los Angeles areas are among the out-of-control wildfires residential communities have seen in the decades.

California’s fires are unusual in several ways. Comparatively, they come late in the year when the weather conditions do not have a potential to fires, and some have grown up in the middle of dense urban areas typically far from fire zones. California’s unusual wildfire activity comes largely due to dry conditions in the region and the state’s Santa Ana winds.

Between October and March, the Santa Ana winds are a common occurrence in Southern California as warm air blows in from the desert leading to blustery days in the region. At their most powerful, the winds can wreck destruction throughout the region, knocking down trees and power lines. The wind’s heat also helps dry vegetation, making it easier to burn. And when there is a fire, the winds can also transport flames quickly spreading the fire from place to place.

That is what scientists say happened in Southern California in recent days as at least four serious fires spread in scattered locations across Ventura and Los Angeles counties, prompting thousands to evacuate and freeways like the 405 to partially close. The Santa Ana wildfire threat index, which measures the potential for the winds to spread fire, ranked the threat level at high or extreme on Thursday from just south of Santa Barbara to the Mexican border.

The hot and dry weather in the region has also contributed to the rapid spread of California’s fires. This year was the second hottest on record when measured halfway through the year. And downtown Los Angeles has received just 0.11 inches of rainfall since the beginning of October.

Lingering over recent California fires is the question of long-term climate change. Hotter temperatures dry out vegetation, making them easier to burn, and scientists say vulnerable regions like California should expect a spike in wildfires in the coming decades as temperatures continue to rise. The effect of climate change on the Santa Ana winds remains uncertain, though a 2006 study in the journal Geophysical Research Letters suggested that warming could move the blazes’ season leading to bigger areas burned by flames.

Still, even as humans continue to stem climate change-causing greenhouse gas emissions at a pace scientists say is too slow to adequately address climate change, a bunch of policy changes can reduce the impact of wildfires like those affecting Southern California from changes in land use patterns to making better use of controlled burns.

But Southern California’s fires should be a wakeup call.

RS200: The Only Ford You Need To Have In High Accord