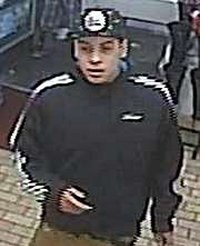 The police of San Jose released an investigation photo of a man who is suspecting of a robbery of beer from 7-Eleven. After that, he stabbed a worker chasing after him.
Police was reported about the incident on February 23, 12:18 a.m. at the 7-Eleven South White Road.
Furthermore, police said that besides of being stabbed, the clerk was kicked and hit by numerous other suspects. This is because he tried to tackle the supposed beer thief outside the store. Fortunately, the clerk’s wounds were not life intimidating.

The clerk came back to 7-Eleven and nearby the rear. After that numerous suspects entered the store and stole items and left in two cars.
The suspect who stabbed the clerk was described as 17-22 years old, Latino and clean shaven. In addition, in his right ear, he had a piercing. He was last seen wearing black tennis shoes with white ties as well as a black Golden State Warriors hat covered with small dots. The suspect wore a black Adidas jacket white pin striping on the arms.
The clerk was able to describe only the gateway cars. According to his description, the cars were black and white sedans.
Those who may know the suspect can contact the Police Department robbery unit of San Jose at 408-277-4166 or leave at the tip with Silicon Valley Crime Stoppers at 408-947-STOP (7867) or svcrimestoppers.org. Tipsters may receive a cash reward.