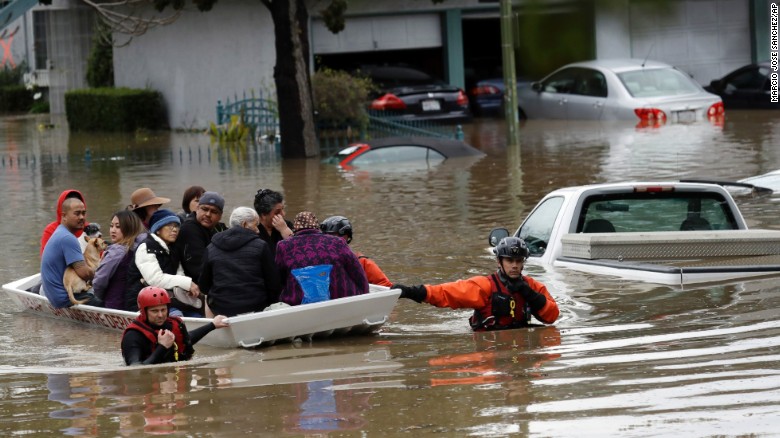 With the heavy rains coming to a halt, residents of San Jose are still not allowed to go back into their homes. 14,000 people faced mandatory evacuation this week and about tens of thousands of more faced voluntary evacuation notices.

Residents reported sleeping in their cars and losing all their personal belongings, such as, clothes, photos, and shoes.

There are still no injuries reported as the water reached up to a several feet on some residential streets. Crews in boats spread out and rescued over 400 people. One firefighter was injured while rescuing some pets.

Anderson Dam, which is located southeast of San Jose, is at 103% capacity at the moment. The water level is 2.2 ft over the top of the spillway.

Coyote Creek has also become a means of investigation. It is a hue question for city officials as to why the creek had difficulty handling more water. The water level of the creek hit a historic high on Tuesday with 13.6 feet. Anything above 10 ft is considered a flooding hazard.

Residents were not only urged mandatory evacuate, they were warned to stir clear of the water. It is believed that the water is contaminated with fuel, oil, and sewage. The drinking water is deemed safe.

Officials will handle future storm events much more differently in the future. As for now, they need to focus on helping those in need before thinking about the changed that need to be made in disaster plans.

We do not own any rights to the video. This video is only for sharing purposes.

42 % of California is No Longer In Drought!