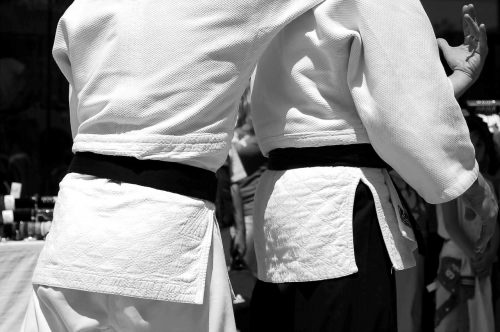 Since coronavirus cancelled the gala in his hometown of San Jose, Uchida instead opted for a video conference. Lydia Uchida-Sakai, his daughter, told The Mercury News prior to the streamed event they intended to use the Zoom platform to connect with the San Jose judo community.

At home, only close family joined the judo legend for a dinner meal and dessert.

Ordinarly, Yosh Uchida enjoys a month long celebration for his birthday. In addition to the gala, he planned to attend the 2020 Olympic Games in Tokyo. However, officials postponed those until 2021.

“I never thought I’d reach 100 but I feel very happy that I have,” he said. Though, he added, “I’ve got to survive to enjoy the things that I have planned…If I’m around for 101 I might as well do something.”

The Storied Life of Yosh Uchida

Yosh Uchida began learning judo at the age of 10. At 42, he organized the first collegiate national championship in San Jose. Subsequently, he coached San Jose State to 40 titles at that annual championship.

Prior to his judo career, Uchida’s family owned a farm in Garden Grove. They started in dairy, but transitioned to growing strawberries and tomatoes. Farming proved a tough life, and inspired Uchida to attend college.

He attended San Jose State where he student-coached the judo team, as well as wrestled.

During World War II, the US Army drafted him. As part of a segregated Japanese-American unit, he served 4 years.

During that time, his own country’s government, under orders from President Franklin Roosevelt, interned 110,000 west coast Japanese-Americans. Among them, Uchida’s family was taken from their farm and forced into the camps.

In the years since, Uchida’s accomplishments demonstrated his propensity for achievement. He built a chain of medical labs, founded the Japanese American Chamber of Silicon Valley, and continued to foster the judo community in San Jose.