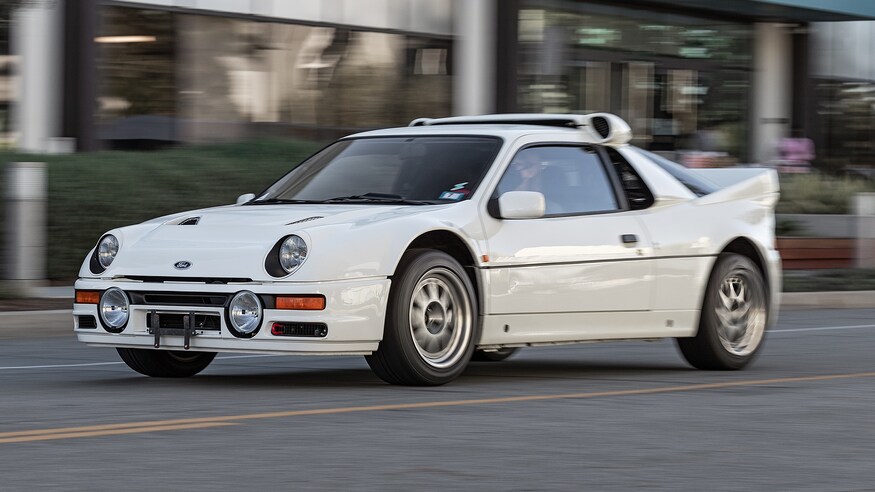 Although the formula for the GT40 and its successors has remained fairly constant—mid-mounted engine in a V-configuration (V-8 for the GT40, supercharged V-8 for the first GT, and twin-turbo V-6 for the most recent GT), rear-drive, and a focus on road-racing—the RS200 broke from the mold. Ford of Europe crafted the car to compete in Group B rallying against the likes of the Audi Quattro, Lancia 037 and Delta, and Peugeot 205 Turbo 16. Much like the GT40 and later the GT at Le Mans, the RS200 aimed to be the pinnacle of the minimally regulated rally series.

Its lightweight Ghia-styled fiberglass clamshells covered a unique platform designed by ex-Formula 1 engineers, and a mid-mounted turbocharged I-4 was built jointly with Ford partner Cosworth. Early versions displaced 1.8 liters and made around 250 hp. Later cars such as the 1986 Ford RS200 Evolution I’m about to strap into (courtesy of Stratas Auctions, where it’s for sale), had a 2.1-liter version making about 600 hp and 400 lb-ft of torque. All that power was routed via a complex system of propeller shafts and driveshafts to a front-mounted five-speed manual transmission, and then out to all four wheels via a transfer case with two modes: rear-wheel drive for tarmac, and all-wheel drive for gravel. In other words, it’s pretty much a reverse, manual Nissan GT-R.

Why Group B Mattered For Roadgoing Hypercars

The basic premise of Group B rules was that each car had to seat two occupants. They had to be side by side in an enclosed cabin. Each manufacturer had to homologate (sell) 200 units for the model to be considered a production car. If you wanted to make a modification or “Evolution,” a further 25 production cars with the modifications were required. This led to an era where automakers were locked in an arms race. Combined with adding horsepower, dropping weight, and coming up with novel engineering solutions in an effort to win rallies.