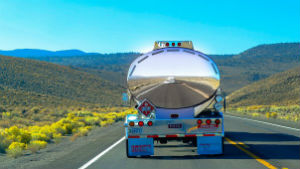 The trucking industry has been suffering from a driver shortage for some time. And, despite the fact, that they’ve made a concerted effort to search for solutions, there remain thousands of truck driving openings. Whether it’s been trying to recruit women drivers or discussions about lowering the minimum age, the problem has largely gone unaddressed.

Recently, however, companies are tapping into an unlikely demographic, convicted felons. That’s right. Currently, over 40 large truck driving operators opened the door to this employee pool.

John Lauria is one of these felons benefiting from this new willingness to hire those with criminal records. The 49-year-old Rosemead man spent 30 years toggling in and out of prison for various drug and robbery crimes.

Upon his release three years ago, he struggled to get a solid job. However, in February, with little hope left, he was hired as a truck driver for Haralambos Beverage Co. in the City of Industry. According to Lauria, he was totally honest about his past when applying for the job. Nevertheless, he was selected and now earns $17 an hour.

According to the American Trucking Associations, the trucking industry needs over 50,000 drivers just to keep up with increased shipping demands from Amazon, Walmart, and other massive retailers.

A New Way to Deal with the Shortage

What does this all mean? Well, it means trucking companies are no longer dismissing felons outright. In fact, more and more companies are giving non-violent, ex-offenders a hard look to fill these openings.

Naturally, it’s no easy transition to flip from ex-con to employee. There’s training both in prison and after release that allows this rebirth to happen.

Even better, a lot of truck driving schools welcome non-violent offenders. They understand that this demographic is eager for work and that companies are simultaneously hungry for drivers.

Most of the companies hiring these ex-felons are mindful that there’s a line to draw in the sand. Almost all make a point to say they wouldn’t hired people with a violent arrest in their past. Though they are definitely open to those with drug convictions from long ago.

While hiring felons hasn’t solved the truck driver shortage, it’s certainly a new pool of talent worth investigating. It just takes a little faith and due diligence.

So, what do you all think of tapping into this group of candidates? Good idea?