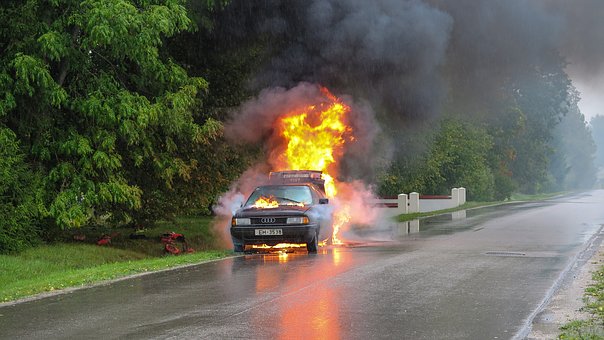 SAN JOSE, CA – A fiery car crash in San Jose has resulted in one death and two people injured. Firefighters were quickly called to the scene of the collision.

The crash, which involved a total of four vehicles occurred on Highway 101, in the northbound lane.

Moreover, the two survivors in the crash were transported to the hospital for treatment. However, details pertaining to their injuries have yet to be released.

However, according to the San Jose Fire Department’s Fire Captain Brad Cloutier, all four vehicles were destroyed in the fire.

The crash report came in around 3:29 a.m. Firefighters were quickly notified of the crash that occurred south of Highway 85, just north of Bailey Avenue. However, all four vehicles had already caught fire and were destroyed.

Moreover, Cloutier further expressed how unique this car crash was. He stated that vehicles don’t typically catch on fire when they’re in a collision. He also added that for this to have happened is rare, but for it to have happened to all four vehicles is unique.

Furthermore, five of the six highway lanes were shut down for most of the early part of the morning. However, after 8 a.m., all lanes were reopened. Still, major traffic delays remain.

Therefore, authorities are urging motorists to take alternate routes to avoid delays. Monterey Road and Santa Teresa have been cleared as an option for commuters. Additionally, Caltrain is also another good method of travel.